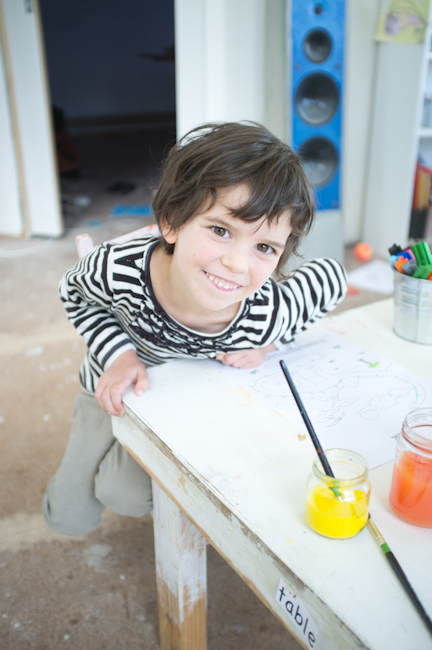 Minty: why do people still tell this story?
Me: it's one of the greatest stories of all time
Minty [concerned]: is it also the longest story?

Me: he had twelve best friends who were his followers
Minty: why did they, you know (gesturing behind herself) follow him?
Me: They didn't literally follow him around… I just meant... um… you know…  spiritually.

Me: Just outside Jerusalem there was a wooded hillside called the Mount of Olives.
Minty: hang on a minute, I have a question… why did he find olives in a pile? [gesturing a mound]

Me: did that make sense or not?
Minty: a little bit… sort of… actually a big bit not and a little bit yes

I wish I could claim credit for this idea but I would be lying.  Minty had a friend over and while they were left to their own devices they decided to strip off and paint their bodies.  They used water-colour paint (just a regular dry palette not the liquid stuff).  They looked awesome and it was sooo much easier to wash off than face paint.  This is a perfect rainy day play activity.  It kept them quiet and happy for ages.

Me [exasperated]: I feel like I'm just shouting at you all the time and you don't listen to me

Minty: well…  sometimes you're shouting soooo loud that your voice travels across the sea to another land and I can't hear you.
Posted by Susan at 11:04 PM 3 comments

We've been making shamrock headbands and straws, drinking green milk and enjoying a rainbow bubble bath complete with leprechaun treasure! (Bath inspired by this one).

Hope your St Patrick's day was full of fun!
Posted by Susan at 5:28 PM 1 comments